The members of the Alaska 9 pack joined the Wolfwood family in July of 2011 as young weeks-old puppies. It was the largest single rescue in Wolfwood's history. Since then, all the puppies have grown into beautiful and energetic young adults. Of course, all young adults have growing pains. With the coming of maturity, the Alaska 9 pack divided itself into two distinct packs. The first pack consists of Banshee, Bruja, Falcon, Kweo, Oakley and Torq. The second pack consists of Billy, Ginger and Sita.

The full story of the Alaska 9 pack can be viewed by using the pull down menu items above.

(Click on a picture to get a larger, high-resolution view in a new window)

Banshee is very much like her sister, Bruja. She is playful and outgoing, but not quite as mischievous as Bruja. She will come to greet visitors and welcome the attention they give her. She will join in with the other members of the pack as they play and romp either among themselves or with the volunteers

Banshee got her name because of the sounds she made as a puppy. 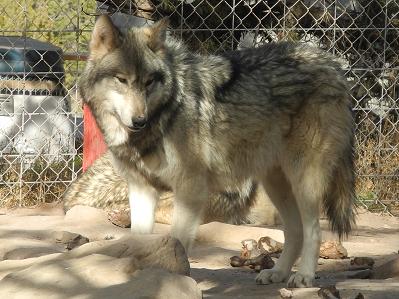 Billy is the stocky, strong brother of Ginger and Sita. Like his siblings, he tends to be shy. Volunteers who sit quietly in his enclosure for a while may be rewarded with a nose poke by him and possibly a short opportunity to pet him. He isn't afraid, just cautious and he will approach you bit by bit.

When Billy came to the Refuge, he was very skinny. But one look at him now shows the affect a safe and secure environment can have. In the wild, Billy may not have survived as he had an overbite that would have made it difficult for him to eat. He has since grown out of that condition and has no problem eating. 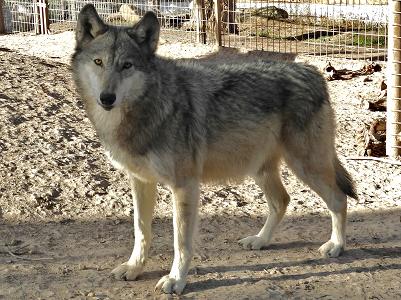 "If there is trouble in the pack, Bruja is probably the one who started it."  Paula's quote sums up the playful, mischief-maker that is Bruja. Aptly, Bruja is Spanish for "witch."

Bruja and Banshee are sisters. Bruja loves people and is not shy about meeting them and demanding attention. She will examine you, sniff you, nip you, try to take your shoelaces and anything else you may have hanging loose (including your camera). Like all wolves Bruja enjoys saying hello by licking your face. She is just a bit more insistent about it. After that, she may give you the infamous "wolf hat" and smother you in wolf kisses. She means no harm, that's just her nature. 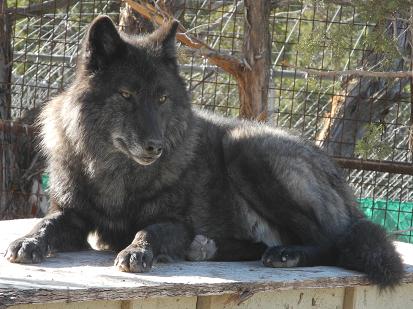 Falcon is Kweo's brother. It used to be impossible to tell the two apart because they both had black fur and were both shy. As they hit 1-year old, Kweo started breaking out of his shyness, but Falcon retained it. Today, Falcon will still stay to the back of the action and will not initially approach visitors. His coloring has also started to change and his fur has become lighter. It is possible that Falcon's coat will turn gray as Ra's did over his early years.

Unlike his brother, who likes to sit on roofs, Falcon prefers to dig borrows and lay in them when not interacting with the other animals. For the patient Wolfwood volunteer, Falcon will eventually approach them and poke with his nose. He used to not want to be petted, but he has begun to enjoy the interactions more as he gets older.

When Oakley is away, Falcon becomes much more dominate in the pack. Torq exhibits his submissive behavior to Falcon and allows Falcon to roll him over. It is a striking difference from when Oakley is present with the pack. 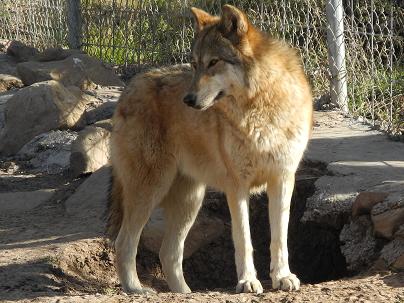 Ginger is the most elusive member of the Alaska 9 pack. She is extremely shy and will stay far away from any visitors. She is part of the new 3-pack along with Billy and Sita, who are her siblings.

Picking Ginger out is easy as her fur has a red tinge to it. But, it is just a coincidence that her name seems to be associated with her coloring. Her sponsors named her after another furry friend of theirs. 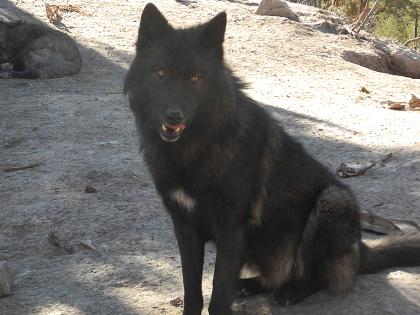 Kweo and Falcon are brothers and are the only members of the 9-pack with black fur. Kweo started out as a shy puppy but has lost that shyness. He will be right up front greeting visitors to the enclosure although he won't be as insistent as Torq for getting pets and attention. He tends to be very gentle.

Kweo loves to enjoy the sun while resting on top of the various wolf houses. If the other wolves are playing around, Kweo is often content to watch and take in the sunshine.

Kweo seems to be the most photographed wolf at the Refuge. It may be his coloring, his calm demeanor or his willingness to stay in one place for more than a second. But everyone agrees, it is hard to get a bad picture of Kweo. 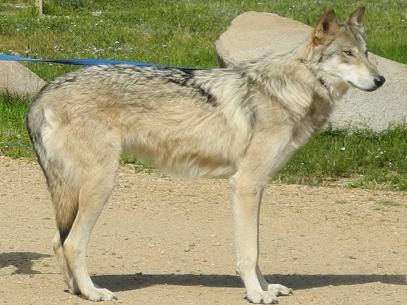 Oakley is the de facto alpha of the pack. He was always the largest and therefore, all the other wolves treated him as the alpha. However, alpha behavior is learned, not instinctive, and Oakley did not have another alpha to teach him. Therefore, he is sometimes unsure how to act in certain alpha situations. While this would be a problem in the wild, it doesn't cause any harm in the Wolfwood environment.

Oakley is one of our traveling ambassador animals and it is interesting to watch the pack dynamic change when he is gone. Falcon, one of the shier wolves, takes on a much more dominate role in the pack while Oakley is gone. In his travels Oakley seems to have developed a crush on Trinity, one of our other ambassadors. He is always looking around to see where she is.

Petting Oakley is quite an experience due to his large size. He is gentle and kind. But he is extremely friendly and, given his size, he can easily knock someone over with his enthusiasm. Because of that, most visitors, especially the smaller ones, will only get to view him through the fence.

Surprisingly, Oakley is not able to jump up on the wolf houses in the enclosure. While all the other animals seem to leap up with no effort, Oakley watches with a twinge of jealousy. But even then, he maintains his regal pose.

Oakley is sometimes called "Big O" after the tire shop that helps support the Refuge's vehicles. 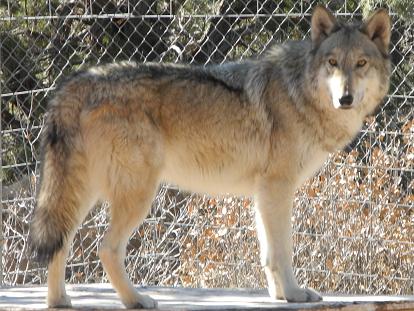 We lost Sita to a massive seizure in December of 2015 at the age of 4.  Below is her original write-up.

Sita, like her siblings Ginger and Billy, is very shy. She will stay back from any visitors but like Billy, may eventually approach volunteers who sit quietly in the enclosure. She will pace back and forth and around a person sitting down and get slightly closer with each pass. Then, she will come close enough to sniff you. You have to resist the urge to pet her though, as she will quickly scamper away the moment you raise your arm. If she sniffs your foot first, watch your shoelaces, as she will try to untie your shoes and steal them away. 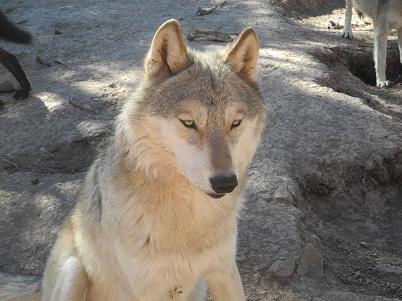 Torq is a lively bundle of energy that always seems to be doing silly things. We sometimes call him "Torq the dork" due to his behavior. You will usually find him somewhere close to Oakley.

Torq is a submissive animal and he will often show that behavior to Oakley by gently nipping Oakley's snout and whining about it at the same time. Don't worry Oakley isn't getting hurt.

When you visit, Torq will be one of the first ones to greet you. He will rub his back up against the fence asking for pets. Any volunteer who decides to put their face up to the fence, will get a face full of sloppy Torq kisses.

Torq has a bit of a strange sleeping position. He sometimes arches his back and points his head towards his tail. When he was a puppy, it was quite an arch. He doesn't do it as often now, but when he does, you have to do a double-take.